Conversations with the Elements: Ethical Community-based Participatory Research with Water

Our fourth workshop took place on the 1st and 2nd of October 2013 based around the River Torridge. It was our final experiential workshop on co-design with non-humans and we wanted to push the concept of participation to its limits by exploring what it might mean to think of a non-sentient 'element' as a possible research partner. We were extremely fortunate to have Owain Jones and Antony Lyons as our workshop co-ordinators, both of whom have already spent a lot of time exploring the agency of water. Our location was chosen in part because of previous work Antony had done on the Torridge and so the workshop was wonderfully informed by networks and conversations he had already been having there. In discussing what kind of participatory approach to adopt, we thought it would be fitting to try out guidelines around conducting ethical community-based research that had recently been published as part of our same AHRC research programme - Connected Communities. We kept these guidelines in mind during our various expeditions and then spend time at the end of the workshop assessing their fit to the kind of frameworks and experiences we encountered over the two days.
Throughout the first day we were struck by the way our focus on water never actually brought us to an experience of 'water' itself, but instead drew us into the complex webs of relationality between the river, the area's geomorphology and the many human and non-human beings that made their lifeways through and with the river. We had learned about freshwater pearl mussels and their relationship with trout and salmon, the butterflies and birds that live only on the culm and saw the rusting boats along the river the Appledore being replaced by water birds and their territories as we moved further up river. Later that evening we heard from Antony as well as Tim Collins and Reiko Goto who shared insights from their collaborative art projects focused on a variety of water issues.
Using the same model that we developed for our Dogs and Trees workshop we spent the first half of the afternoon using what we'd learnt from the workshop to identify potential research projects and working in groups to sketch out how these projects might take shape using the guidelines from our chosen participatory method. We then spent the second half of the afternoon reflecting on the whole process and trying to tease out the benefits and drawbacks of using the method with our particular research partner. With a quite limited amount of time for this session we selected three research topics from a range that were suggested and used these as the basis to work through the three core areas identified in Community-based participatory research: A guide to ethical principles and practice [PDF]:
The first group worked on the project Inventory of language ascribing agency to the river which picked up on the wide-range of ways we had heard people talking about the river as an active force. They explored how a better understanding of the way people are already talking about the river, and the way this changed as people moved in and out of 'official' or 'scientific' contexts, might shed light on how water might already be considered as a participant in people's everyday experiences. They focused on the ethical issues that arise during preparing and planning such as understanding why different partners might want to work together in the first place, making sure that participants reflect the range of perspectives and experiences that affect an issue and developing a shared understanding of the project's aim and objectives.
A whole range of issues came up which we are still digesting and analysing. For most people the attempt to understand 'water' as a separate participant, outside of its context was a problem. Instead people moved towards thinking of the research partner in terms of the specific river and even further that our 'partner' needed to be understood in terms of the wider water-shed understood as a social-ecological community. Language was another central issue with a range of discussions around how to understand communication in broader ways, including in more embodied, material and physical ways.

Specific ethical issues around permission, confidentiality and inclusiveness, which are hard enough in human contexts, often seemed to implode at first when looked at from our context, although some came back together again in reformulated ways. Can you ask water for permission? Does this assume a specific fixed entity rather than a ubiquitous system? Perhaps permission issues should be thought of a working from an ethic of flourishing for all involved? And what about confidentiality? Is there anything that the river might tell us that we shouldn't share? We could definitely think of issues related to humans that came up in our visits that shouldn't be, but what about things like the data from the salinity testing? When doing analysis, what would it mean to keep the river seriously in mind as well as the communities that are part of its webs of relationality? What role is there for imagination and empathy? And particularly what might the arts and humanities bring to the conversation? Finally we were struck by the seeming incommensurability of the questions we were asking of ourselves and wondered what to make of the linguistic friction we were encountering.
Thanks to Andy, Becky and Dave for being so generous with their time and knowledge, to the Yeolden House Hotel for hosting us in amazing surrounds and to Antony and Owain for organising the workshop. 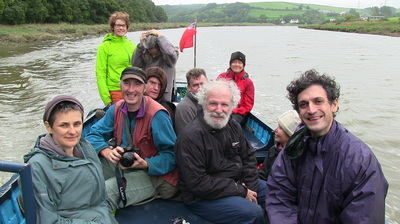 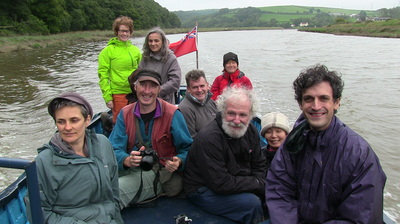 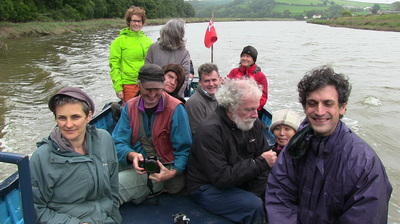 Participants out on the River Torridge
Powered by