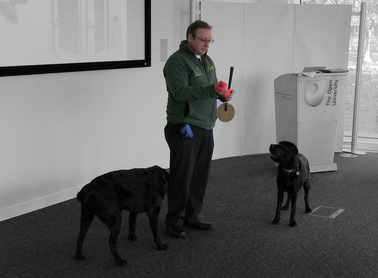 Duncan Edwards with Winnie and Cosmo
Our first workshop took place on the 12th and 13th of April 2013 at the Animal-Computer Interaction Lab (ACI), part of the Computing Department at the Open University.  Our brief was to explore how one particular method for co-designing research -  Participatory Design - might be adapted to working with non-humans, more specifically dogs. Participants included members of the project team, researchers at the ACI lab, two dogs from Dogs for the Disabled, Winnie and Cosmo, their trainers Helen McCain and Duncan Edwards, as well as Helen's companion dog, Willoughby.

We had already found that the process of designing the workshop itself had pushed us to think in new directions, so the team were really excited about what the two days themselves would bring. You can find reflections on everyone's experiences on the blog, and on this page we want provide a sense of what we actually did in the workshop.

In participatory design processes users are invited to work with designers and researchers to identify design problems, develop responses to these problems and then evaluate and refine them. Of course in a two day workshop we would never be able to do justice to each of these steps, but we were interested in trying out a cut-down version of this process that would help us get an initial sense of what kinds of issues might arise as a result of trying to include dogs in these processes. We decided to focus particularly on exploring the issues, identifying design problems and then coming up with some initial prototypes.

On Day One most of us initially spent a little time getting to know each other and then getting a broad overview of the project and the work of the ACI team. The dogs didn't participate in this first session, as Helen and Duncan wanted to get a feel for the venue first and to check out what the rest of us were like, though they did have name tags made up for them like the rest of the participants. This led to discussions at the time (which continued across the rest of the workshop) about what this meant from a participatory point of view. Intermediaries are often involved in participatory research, for example, and perhaps a desire for what seemed like equality might actually put the dogs at a disadvantage by putting extra stress on them and their trainers. This remained an open issue throughout the workshop.
On Day Two Clara put us to work designing. Helen and Duncan had identified buttons and doors as two key challenges that assistance dogs faced in their work and so we divided into teams to try to develop some paper prototypes that might respond to each of these design issues.
Thanks to Helen, Duncan, Winnie and Cosmo for contributing so much to the workshop. Thanks also to Clara Mancini for designing and organising the workshop, and to the rest of the ACI team for hosting us!

The research team from a dog's point of view
Powered by